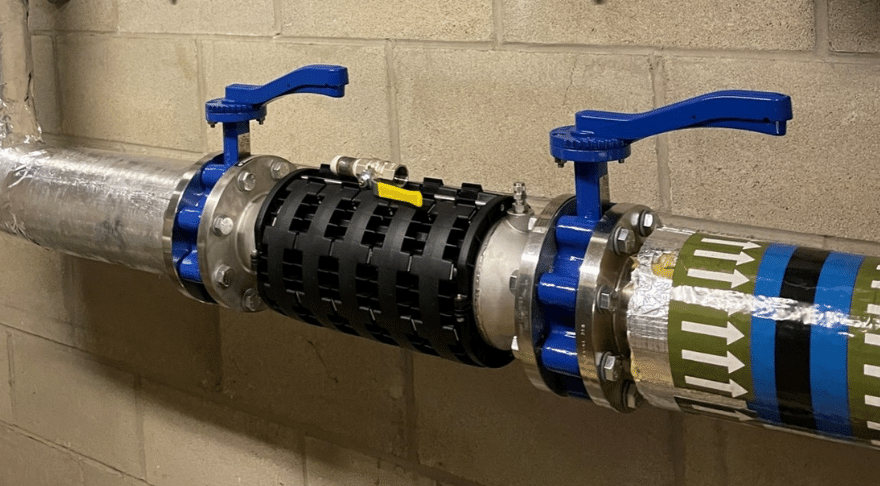 Hull Magistrates court is a four-storey building with various plant rooms and is around 15 years old. Following a review of electrical systems by electrical contractor ESL, significant issues with heating in certain areas of the building were identified. Heating contractors Enright Environmental were appointed to identify the cause of these issues and provide solutions.

An initial fact-finding visit quickly established that the condition of the circulating heating water was very poor. The heating system had been somewhat neglected in recent years, and the resulting poor quality system water risked causing damage and system breakdown. Enright Environmental’s first and strongest recommendation was to install a suitably sized magnetic filter, which would capture damaging sludge particles and provide a long-term solution to improving the effectiveness of the heating system.

Due to the size of the primary pipework in the main boiler room, the contractor quickly established that the best filter to install was the MagnaClean DRX®, available in 2˝, 2 ½˝, 3˝ and 4˝ pipe dimensions. The MagnaClean DRX from ADEY has been specifically developed for commercial heating systems and features unique magnetic belt technology making servicing quick and easy. A compact design, the filter was very easy to install and blended in nicely with the existing pipework.

A revisit a week later removed a considerable amount of sludge for such a short time, so three further visits were planned over the next few weeks. Non-flush system cleaner and later inhibitor were added to the system to provide added protection. Subsequent visits allowed an opportunity to assess improvement of the situation with a view to looking at further ways of increasing the efficiency and reliability of the heating system.

“We are confident that we can keep the system functioning for many years to come and it’s safe to say that the MagnaClean DRX 4″ filter is playing a large part in that. We always advise that magnetic filters are fitted to any system and it’s never too late. The reduction in breakdowns and increase in efficiency are appreciable over time”

“We are confident that we can keep the system functioning for many years to come and it’s safe to say that the MagnaClean DRX 4” filter is playing a large part in that.”